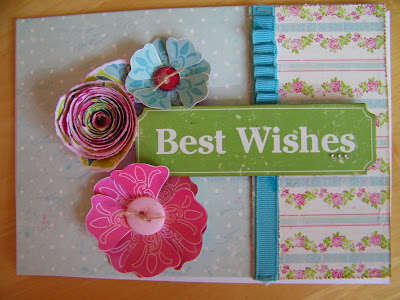 Here is my third set of cards, if you missed out on the two previous post they are on May 31st and June 6th posts if you would like to see how I transformed the cards from the kit. I used the card base, flower stripe paper and Best Wishes from the kit. I distressed my edges with the Tim Holtz distress tool and inked the edges with Chestnut Roan Ink. I added a ribbon that I looped using my Tim Holtz Tiny Attacher. 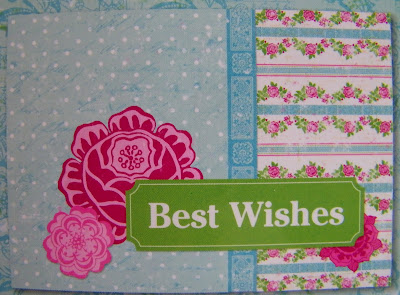 Here is the original card from the kit and now on to these fabulous flowers and how they were made. 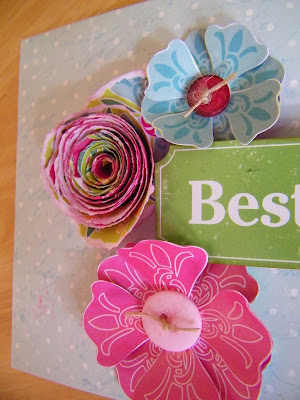 The blue and pink flowers were cut from the Cosmo Cricket DeLovely DeLectable paper that I painted with Tattered Angels Glimmer Glaze, once they were dried I layered them and placed buttons in the center of each that I had tied some blush twine to. My pink rosette is a torn circle from the Cosmo Cricket Delovely DeLectable paper. I tore it into a spiral, twisted it around my tweezers and glued it to the base of the circle. I did allow it to spring out a bit before I glued it. I then placed it on my card and add three small gemstones to the Best Wishes die cut that I had placed on pop dots 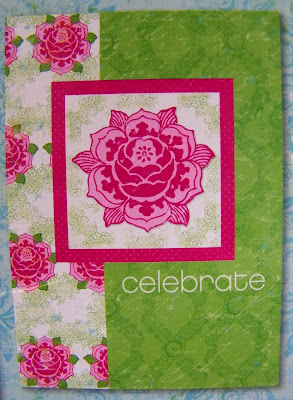 Here is the last card that I will be sharing from the kit, I sure hope you have enjoyed the transformation of the cards that I have shared with you over the last 3 weeks. 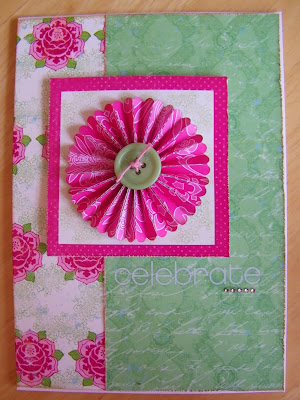 I used the card base, the flower paper, rub on and square die cut from the kit. 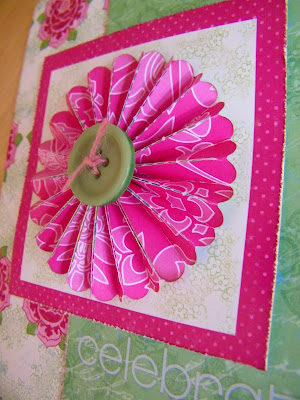 I made my rosette from the Tim Holtz Rosette die. After it was glued on to the square die cut that I placed on pop dots I added a button to the center that I had blush twine tied to. I added the rubons under the die cut along with some small clear gemstones.
Supplies:
TPC Studios Blissful Blossoms
Tim Holtz Rosette Die
Tattered Angels Glimmer Glaze
Tim Holtz Distress Tool
Tim Hotz Tiny Attacher
Cosmo Cricket Delovely DeLectable
Gemstones
Buttons
Blush Twines
Posted by Pammejo at 2:00 AM 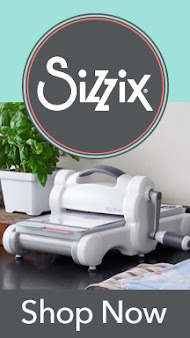